While working on a pipeline component I encountered a very strange behavior of XML disassembler. I had few promoted properties which I was trying to access in a pipeline component in Validate stage after the execution of XML Disassembler. As we all know that the Pipelines are executed in sequential manner and the output of one pipeline component is used as input to the next one in the sequence(except in Disassemble stage). ( Read more- Understanding Pipeline Execution). So, ideally after execution of XML Disassembler, Promoted Properties should be accessible in later stages. But shockingly there value was NULL. Now let’s have a look into my sample BizTalk application for better understanding. I have a simple schema in which both the properties are promoted-

Receive Pipeline Image But strangely when I tried to fetch the promoted properties found out that it’s returning NULL as shown below. 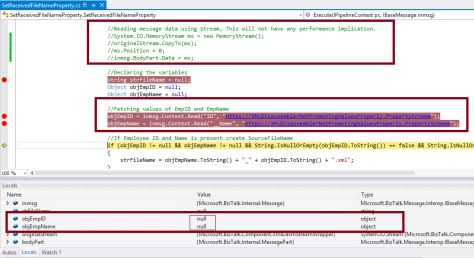 Promoted Properties as NULL in Pipeline component Image Cause:- After some research got to know that it’s a known behavior. Basically, the XmlDisassembler does not read through the incoming message immediately.  It waits until some later component or the MessageBox reads it.  This is done for various performance reasons like memory consumption, etc. So, since my custom pipeline component is next in line, when it gets the Message, data has not yet been read by the XmlDisassembler even though it passed that Stage in the Pipeline, so it hasn’t had a chance to Read and Promote any Context Properties.  This is by design, and what you are seeing is a known side-effect. Its accomplished by wrapping the data in a custom Stream class.  That is why it only gets read and processed when some other component reads it. Solution/Workaround:- The easiest option would be to just do you work with the Properties in an Orchestration. If you absolutely have to use a Pipeline Component, then you will have to somehow force a Read by the XmlDisassembler. For example in our pipeline component we have read the values using below code and forced a Read/Promote by the XmlDisassembler. //Reading message data using XML Document. System.Xml.XmlDocument xmlDoc = new System.Xml.XmlDocument(); xmlDoc.Load(originalStream); Using XMLDoc can have performance implication as the complete message will be loaded in memory, so you can use the below code as well. //Reading message data using Stream, this will not have any performance implication. System.IO.MemoryStream ms = new MemoryStream(); originalStream.CopyTo(ms); ms.Position = 0; inmsg.BodyPart.Data = ms; As shown in below image. 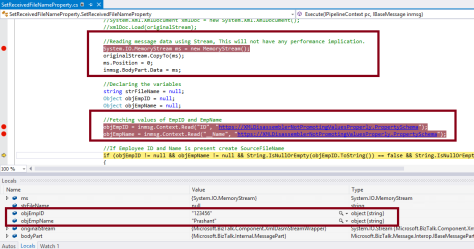 Promoted Properties containing Value After performing Forced Read by XML Disassembler Image   Check the discussion over the same issue- XML Diassembler component is not doing property promotion   Hope it helps.   Download the sample application from here. Word version of this blog is here.